Every great once and a while, a farmer gets off the farm. About as far off the farm as I dare get is onto to someone else’s farm. So when Katie and I took off out of town, in early November, we headed straight for Upper Rogue Organics. Upper Rogue is a small 10 acre fruit and vegetable farm in Prospect, Oregon. The Navickas brothers, Eric and Ryan, have been market gardening for almost 20 years now. I met these two in 2002 at the Ashland, Oregon Farmer’s Market. Instantly we became friends, and over the years they have become my most admired mentors. I wanted to introduce Katie to the Eco Vikings and show her where I learned I wanted to be a farmer.

Eric and Ryan had grown up gardening and when Ashland decided to host a farmers’ market to the young Ryan Navickas it seemed a no-brainer. Grow veggies on an old empty lot and sell them at the market. Soon Ryan had recruited his older brother Eric and their farming careers began. This is around 1995, before Omnivore’s Dilemma, before… It became clear very early these guys had a talent for growing veggies and their family helped them purchase the 10 acre farm in Prospect, a mere 25 miles from Crater Lake. Amongst the beautiful mountain setting this place is perfect for market gardening thanks to the volcanic soil and temprate climate. There is also plenty to do and see for the outdoorsmen in the Upper Rogue area, including prime mushroom hunting.  (Marty)

Marty and I set off on our much-anticipated fall vacation and babymoon.  After a lovely morning visiting the breathtaking Crater Lake and hiking along the Upper Rogue River, we rolled up to Ryan and Eric’s farm.  Sadly, though, nobody was home, and Farmer Marty had insisted on not bringing our tent, and not calling to tell them we were coming.….luckily for Marty, when we returned a few hours later, Eric and Ryan were there, and it turned out that they actually were the kind of friends where you could just show up at their doorstep with no call or anything.  Along with Eric’s partner Amy, they felt like old friends, even to me.  It may seem weird, but working in somebody else’s garden is totally relaxing for me, no decisions to make, nobody asking questions, and those weeds aren’t my problem!

The highlights of Upper Rogue Organics were their hand-built, straw-bale house, their outdoor kitchen where we enjoyed a number of home cooked meals including a soup of wild chanterelle mushrooms,  and their “guest cottage,”  a three-sided wooden structure which I suppose doubles as a wood shed, but includes a tiny woodburning stove that kept us toasty despite the chilly, rainy, night.  It was probably the loveliest night of camping I’ve ever had, and have decided that I need one of these stoves.  (Katie) 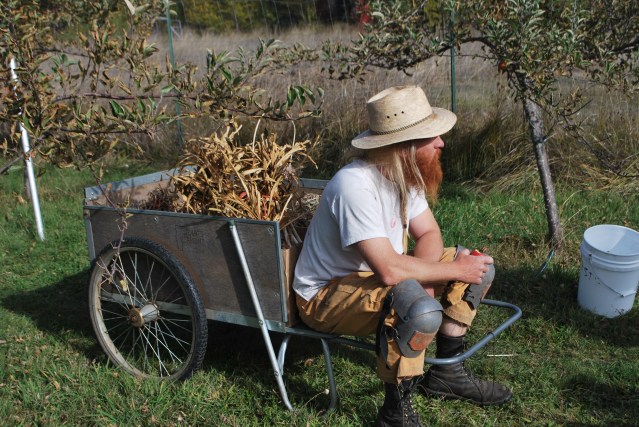 Being as I was tending my own farm in the peak of the season we showed up just in time for the last market of the Upper Rogue season. Fascinating thing about the Ashland Market, it’s on a Tuesday morning, has as many vegetable vendors as the Boise downtown market, half the crowd, farmers make twice as much. Anyway, Eric and Ryan do a lot of berries and starting next year will be selling the most divine strawberry-raspberry jam I’ve ever had the privilege of eating. Another thing they grow a lot of is garlic. A lot of what they grow changes over the years, they have a few cash crops like blue berries, garlic, napa cabbage, daikon radish and apples and the rest they grow to eat and sell a little.

Back in 2002 when I worked on a farm 35 miles down the road in Trail, Oregon, I’d visit Eric and Ryan on all my days off. After working all day we would sit by the fire, eat campfire food like I have never tasted and talk about Wendell Berry’s book Unsettling of America or sing songs from the little red hymn book. We thought we could actually physically change the world with our hands and some tools. At Upper Rogue Organics things aren’t that much different than they were. I was glad I could show Katie the magic in the mountains and it seems it has rubbed off. If you’re ever at the Ashland Farmer’s Market look for Upper Rogue Organics, tell ’em Farmer Marty sent you and be careful the garlic is magic!  (Marty)

3 thoughts on “A Visit to Upper Rogue Organics”