If you know Farmer Marty, you know he likes his dessert.  And if you know me, you know I demand high-quality desserts, not junky store-bought ones.  What can be better in the summer than ice cream?  And what’s better than trying to make something that most people usually just buy at the store?  Not much, I tell you.  Earlier this summer we borrowed Marty’s sister Kelly’s ice cream maker, and have been holding it hostage for the past couple of months!

At the height of our summer ice cream experimentation and dairy over-indulgence, we were invited to the First Annual Ice Cream Making Contest and Social, by Rachael Teannalach, our friendly neighborhood artist, yoga instructor, and CSA member.  What a great idea!  As I revealed to Rachael, practically the only way to get Farmer Marty to attend a party with people he doesn’t know, is to create a food contest.  See Soup Swap.  Knowing there would be dozens of kinds of ice cream to sample and vote on, I didn’t even have to drag him there.  (And he says it was fun, and that he met some very nice young men from the Boise Philharmonic.) 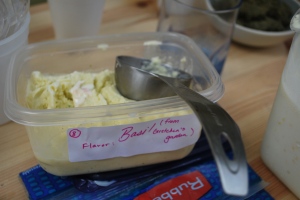 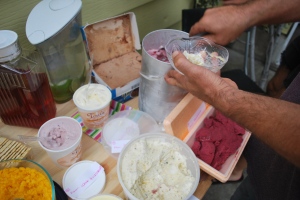 Some of the awesome flavors included Basil, Peach, Lemon Custard, Baklava, Vanilla, Mango Lime Granita, and our contribution, Basil Berry.   Folks who didn’t have ice cream making equipment were allowed to bring their favorite store bought flavor (and I have to admit that Ben and Jerry’s Cookie Dough, and the Huckleberry Gelato from the Coop, are hard for us amateurs to beat).

We didn’t win the contest, but learned a couple of important things.  The cooked recipes, with eggs in them, were awesome.  We’re trying that next.  Most people served their creations soft, right out of the ice cream maker, which was better than freezing it hard the way we did.  We probably need a better ice cream maker, too, any good product suggestions from our readers?

Scroll down to see our most successful ice cream recipes so far, and feel free to send us yours!  We got both of these from an old, 1964 version of the Joy of Cooking that I found at an antique shop.  Interestingly, that version has an extensive section entitled “Ice Creams, Ices, and Frozen Desserts.”  Marty’s 1997 version has eliminated that section completely!  Seems like nobody ever makes the good stuff anymore!