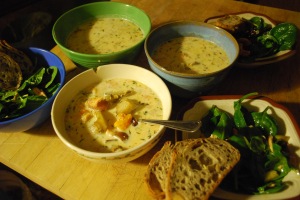 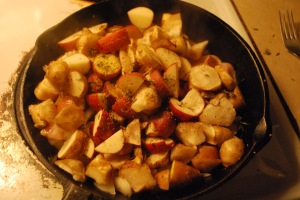 Pre-bake the winter squash and the rainbow trout as described in previous post.

Heat cast iron skillet on medium high.  Sauté chopped bacon and onion until onions are soft.  Add a sprinkling of salt and pepper and 1 Tbsp of the thyme.  Add potatoes and Jerusalem artichokes and continue cooking until browned and caramelized. Put baked trout pieces and baked winter squash pieces, ½ Tbsp crème de porcini in a large stew pot.  Sprinkle baking soda onto caramelized vegetables.  This is supposed to keep the milk from curdling.  Pour milk over the browned vegetables, heat one minute, and pour all of that into the stew pot.  Heat to a boil and reduce heat to simmer.  Add the rest of the thyme, chopped garlic, and leeks. 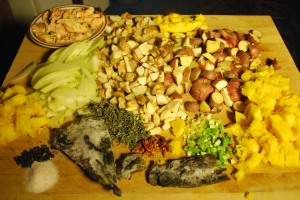